Blood Sisters came out at an exciting time. It wasn’t just the discovery of Richard III’s bones under a Leicester car park, but the role the women in his life played in confirming his identity. Here’s an article I wrote at the time. 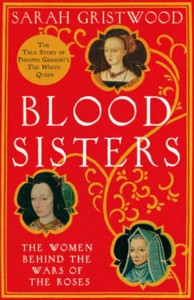 We know Cecily Neville lavished a fortune on clothes, and ordered a specially padded loo seat. We know that in youth, stories said she had an affair with a common archer, and that in old age she lived a life of extraordinary piety. Now we also know that the bones found in a Leicester car park were identified as those of Richard III through a descendent who shared with him his mother Cecily’s DNA.

But the centuries-long doubt over the site of King Richard’s body only highlights the question of what we do – and don’t – know about this period of history. Even if tests prove for certain the bones are Richard’s, there are still riveting questions to be explored – and not just about the man himself, perhaps the most controversial figure in British history.

His was an extraordinary family, with Cecily as its matriarch. So where did she stand when her son Richard took over the country, amid rumours he had murdered his nephews, her grandsons, the ‘Princes in the Tower’? Or when her eldest son Edward ordered the death of his next brother Clarence in the famous butt of malmsey?

When Richard III died on Bosworth field, at the hands of Henry Tudor’s invading army, his body was stripped naked and brought back to Leicester for burial, after a humiliating public display. The fact that the grave has since been lost is just a final uncertainty. Was Richard indeed the child-killing monster of legend (and of Shakespeare’s play), or a much-maligned king, whose takeover was justified by the tense political situation and who might have ruled the country wisely?

Was he really the hunchback, born with teeth and a full head of hair, or was that just part of later Tudor mythology? As so often there may have been a grain of truth in the dramatic stories – the skeleton now found at Leicester displays severe scoliosis, or curvature of the spine. ‘Richard Crookback’, maybe.

But among the many mysteries over the man (and indeed the manner of his death, since the battlefield at Bosworth too has been the subject of recent archeological appraisal) one thing is clear. When Richard died, his mother Cecily, the duchess of York, had now lost all the sons she’d seen into adulthood; and, out of the four, only one had died naturally.

The women behind the Wars of the Roses were playing what it is hardly an exaggeration to call a game of thrones. The business of their lives was power, their sons and husbands the currency. But all most of us know of them are the stories Shakespeare set down, and that was four centuries ago – never mind any questions of historical accuracy. Now, of course, there is another wildly popular version in currency, but it has been a long wait from William Shakespeare to Philippa Gregory.

Yet Cecily’s life is the stuff of writer’s fantasy. Born in 1415 as the beautiful ‘Rose of Raby’, she was daughter to the powerful Earl of Westmorland. Married young to Richard, Duke of York, she accompanied him when he went to govern England’s territories in France, living in high spending luxury.

Two of her sons were born in Rouen; indeed, it was later alleged that she also, while there, had an affair with an archer named Blaybourne, and that her eldest son Edward was the child of this adultery. It was one of the grounds on which Richard III claimed the throne rightfully belonged to him/ But there is no sign that Cecily’s husband complained at the time, and if the stories were true, that seems extraordinary.

As the Wars of the Roses set her husband at armed conflict with the crown, Cecily suffered a dizzying series of changes of fortune; at one point left alone with her younger children to face a hostile army. Her son Richard had been born in 1452 and the event may indeed have been traumatic in some way. Sir Thomas More recorded that it was a breech birth, and Cecily could not be delivered ‘uncut’.

Cecily’s husband and second son Edmund were killed at the battle of Wakefield in 1460. But only three months later, her eldest son took the throne as Edward IV, and it was soon said that his mother ‘holds the king at her pleasure’, to rule as she wished.

Perhaps that didn’t survive his marriage to Elizabeth Woodville. Cecily was horrified at this love match with a mere commoner. As rivalry came between Edward and his next surviving brother George, Duke of Clarence, Cecily tried unavailingly to mediate between her sons; though contemporaries wrote that it was her pleas won the rebellious Clarence the right at least to choose the manner of his death.

Only five years later Edward himself died, leaving his twelve year old son to rule a turbulent country, and one theory suggests that Cecily was the guiding spirit behind a family decision that the adult and experienced Richard should instead assume the throne. Evidence, however, is scanty.

It is possible, instead, that Cecily took a step backwards away from the spotlight in the years following Clarence’s death. She was after all already in her sixties, and it would have been understandable if she were simply as punch drunk as any other old fighter, keeping herself out of the fray.

Her daily life was recorded a few years later. ‘She is accustomed to arise at seven o’clock and has ready her chaplain to say with her matins of the day, and matins of Our Lady; and when she is full ready she has a low mass in her chamber, and after mass she takes something to recreate nature; and so goes to the chapel, hearing the divine service and two low masses …’.

She was living the life of a lay nun, effectively. She had by then every reason to turn to religion for consolation – and the other women around Richard’s throne too, maybe.

There was Richard’s wife Anne Neville, daughter of Warwick ‘the Kingmaker’, Cecily’s great-niece as well as her daughter in law. Before the Yorkist Richard married Anne (snatching her from Clarence, who was said to have kept her disguised as a kitchen maid, for fear her huge fortune might escape his hands), she had been married off by her father to the Lancastrian Prince of Wales, to cement an unlikely alliance with queen Margaret of Anjou.

Even if there is no truth in suggestions Richard caused her early death, either by poison or a campaign of psychological warfare, she had been passed from one side to another in the wars as though she were as insentient as any other piece of property. Shakespeare telescoped events to make her his ‘Lady Anne’, but the truth is even more poignant.

There were Richard’s enemies – Margaret of Anjou herself; Edward IV’s widow Elizabeth Woodville; and Margaret Beaufort, the mother of Henry Tudor. It was those last two who brokered the marriage deal, between Henry and Elizabeth of York, which would cement the peace which followed Bosworth, and give birth to the Tudor dynasty. Though there had, earlier, been reports that Elizabeth planned instead to marry Richard himself – her own uncle. Richard was forced to deny the rumours, publicly.

The women are important in the late fifteenth century story. Indeed, the mitochondrial DNA which may identify Richard’s bones is passed only through the female line; from Cecily to her eldest daughter Anne, Richard’s sister, and on through seventeen generations to descendents living today.

But through a different chain of descent, Cecily’s blood important in another way. Through Elizabeth of York, Cecily’s granddaughter, and Elizabeth’s children – Henry VIII and his sisters – it still runs in Britain’s royal family.

Her life saw the most bitter tragedy – but, the imperatives of her age were not necessarily those we understand today. Everything we know about these women suggests their main ambitions were dynastic – genetic. If so, then the triumph of that genetic line might well have ranked higher in Cecily’s mind than whatever price she had to pay.