Buy US Edition from Amazon.com 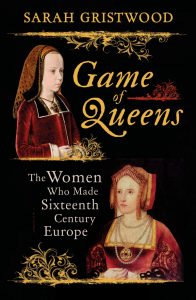 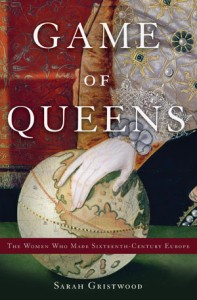 The sixteenth century saw an explosion of female rule scarcely equalled even today. Large swathes of Europe were under the firm hand of a reigning queen or a female regent – mothers and daughter, mentors and proteges. Game of Queens traces the passage of power from Isabella of Castile to her daughter Katherine of Aragon, and on to Katherine’s daughter Mary Tudor. From the French regent Anne de Beaujeu to Louise of Savoy, through Louise’s daughter Marguerite of Navarre to her own daughter Jeanne d’Albret (heroine of the Protestant Reformation), and to Marguerite’s admirer Anne Boleyn and finally to Elizabeth Tudor.

Some of these women are household names; others virtually unknown to many of us in the English-speaking countries. But this was a sisterhood which recognised both their own bonds as women, and their ability to exercise power in a specifically feminine way. Women would come to find themselves at the forefront of the great religious divides that racked the sixteenth century. In the end, after the horror of the Massacre of St Bartholomew’s Day, religion would drive them apart, and bring an end to the Age of Queens. But this is a book with a fresh resonance for our own day.

In the sixteenth century, as in our own, the phenomenon of the powerful woman seemed to offer both challenges and opportunities. Opportunities, as when in 1529 Margaret of Austria and Louise of Savoy negotiated the ‘Ladies’ peace’ of Cambrai. Challenges, as when both Mary Queen of Scots and her kinswoman Elizabeth I came close to being destroyed by sexual scandal. From the emphasis on the appearance of a powerful woman, to the question of her consort, these women have much in common with the female leaders of today.

‘The great strength of this book is to show how the stories of Katherine of Aragon, Anne Boleyn and Mary, Queen of Scots, so often told in British isolation, were in fact closely entwined in the titular European “game of queens”.’ – The Daily Telegraph

‘Gristwood’s fresh take on a well-documented period and the achievements, failures, and relationships of some of Europe’s most powerful players is intriguing, cohesive, and accessible.’ – Publishers Weekly

‘Gristwood handles multiple narrative strands with tremendous finesse, dexterously synthesising the stories of women who, in many cases, never met but whose lives intertwined in manifold ways. By presenting the triumphs and tribulations of Henry VIII’s womenfolk within a wider European context, she tackles the subject in a fresher way than would be permitted by a purely Anglocentric approach. Densely packed with fascinating material, this immensely ambitious undertaking succeeds triumphantly.’ – Literary Review

‘In her latest intriguing collective biography about overlooked women of historical significance, Gristwood portrays the sisterhood of Renaissance movers and shakers … A fascinating work of world and women’s history.’ – Booklist

‘what could be a dry examination of policy and power becomes, in Gristwood’s hands, a lively, accessible, occasionally hilarious, absorbing account of an astonishing era.’ – The Amazon Book Review

‘It isn’t very often you come across a book that is nearly perfect in execution but this one fits the bill. Gristwood had done her homework in researching the history of these women, creating a most enjoyable read.’ – The Freelance History Writer Notes and Reviews