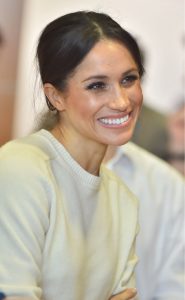 Of course Prince Harry’s marriage to Meghan Markle is in many ways extraordinary. American, of mixed race and divorced – things have changed since Edward VIII and Mrs Simpson, surely.

But let’s not get carried away. In one very important sense, Prince Harry’s marriage shows him dutifully conforming to the very oldest traditions of the Royal Family.

Princes, back in medieval or Tudor, were supposed to marry to cement an alliance, with a foreign power or another royal family. But guess what? These days the alliance that Britain’s royals really need isn’t with some continental power, or minor German principality.

What the monarchy needs now is an alliance with the vast mass of Her Majesty’s subjects – both in the British Isles and beyond. No surprise that this week, Meghan is scheduled to join the Royal Family at the Commonwealth Heads of Government meeting.

She joined Prince Harry to visit the Youth Forum, whose topic this year is ‘Powering our Common Future’; the next day they will attend a Women’s Empowerment reception, along with representatives from important charities focussing on girls’ education. Topics on which Ms Markle (unlike some of her prospective in-laws?) should have a good deal to say.

Yes, of course, the union of Harry and Meghan on May 19 will be first and foremost a love story. No-one would see it differently. But it is also quite convenient for the Royal Family. Maybe that’s why they welcomed it so warmly.

When Prince William his married long-term girlfriend Kate Middleton, it was a happy coincidence that she represented the first thing the royal establishment did need – an alliance with their non-royal, non-aristocratic subjects in the UK.

Prince Harry’s marriage represents a further stage in the same process – the second thing the royals need, you might say. An alliance with many more of Elizabeth II’s subjects within, and admirers outside, Britain. The Royal Family is supposed to symbolise the country – to serve as a mirror, if you like, in which their subjects can see their own face. But Britain is now a multi-racial society, and the royals were not mirroring that very clearly.

There is moreover that question of the monarchy’s sphere of influence outside the UK. Coincidentally or otherwise, it was after his engagement was announced news broke that Prince Harry would be taking a prominent role within the Commonwealth. It was hoped, authorities declared, that he would attract in younger members. Indeed, his important work with wounded ex-servicemen and with international charities makes him a natural for the part.

But even beyond that his prospective bride, with her bi-racial origins, will make the Royal Family seem relevant and immediate to many who had previously felt distant from it. The Queen’s position as head of the Commonwealth will not automatically pass to her successor after her death.

There is a move for the next head to be chosen more democratically – and perhaps not to come from the unrepresentative gene pool of the white English aristocracy. So for some year now we have seen Prince Charles effectively on the campaign trail, trying to win allies within the Commonwealth. This week’s controversy over Britain’s treatment of the Windrush generation can only have been bad news for that campaign – but Meghan’s appearance is at least one tiny move the other way.

So far, we’ve been talking about what’s in it for the royals. But what about Meghan Markle’s side of the story? Of course she is marrying the man she loves, and that would surely be enough. Beyond that, she’ll be getting an ever-higher platform for the causes she believes in. But there may be a price to pay.

Historically, royal brides have been expected to cease advocating for their own interests (or their own countries). To put up and shut up, basically. Will Meghan Markle manage to change that? Maybe.

She represents, after all, another powerful alliance – a connection to the American-born world of celebrity, surely the dominant culture of today. And yet another, perhaps, to a world where women speak their minds; in which they might be seen as powering into a global future, with education smoothing their way.

One way and another, Meghan Markle is bringing a lot to the Royal Family. It is her dowry, basically. But the Royal Family need to give as much back, if we’re all to move on through the 21st century.