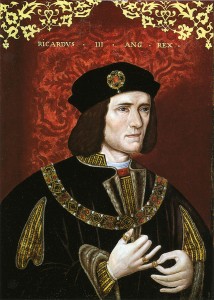 I think it was the men on horseback that finally got to me. Two knights (or near offer) in shining armour, riding through the streets of Leicester ahead of Richard’s coffin, while the spectators threw white roses, and the officials at the cathedral prepared to receive him with all solemnity. So how many echoes are there of that other, distant, royal reburial ceremony? Because we’ve been here before – or Richard III has, anyway.

In 1476, several years before he took the throne, this Richard’s residence in the north made him the natural choice to escort the remains of his father Richard Duke of York (and those of his brother Edmund) south to be re-interred in the York family’s new mausoleum at Fotheringhay. It was more than fifteen years since they had died at the battle of Wakefield; when the duke’s head had been set on a spike, crowned with a paper crown, before the bodies were buried there in Yorkshire with (sounds familiar?) scant ceremony. But now the York dynasty held the throne, and the thing had to be redone, properly.

It took ten days, then, for the cortege to wind its way south: Richard III, by contrast, went only a few hours’ car journey before he was brought to Leicester cathedral yesterday. Then as now, even after the bodies had been received into the church where they would remain, the ceremonies went on for several more days.

Then as now rich cloths were used to cover the coffin – great lengths of cloth of gold, then; and now that specially designed pall, with a crown atop it. Then, the dead duke’s knightly trappings – shield, sword, helmet – were born into the church by noblemen; though his horse was led only as far as the door. The suppliers’ bills still survive for the huge meals which in 1476 feasted all the neighbourhood; perhaps there’s some equivalent in the boom Leicester hope their new heritage centre will now bring to the town’s economy.

But the real echo has to to be this – that then as now, this was a party with a point. In 1476, the message sent was that the House of York were here to stay. (Yes, it would be less than a decade before Bosworth brought in the Tudors – but the Plantagenets didn’t know that, fortunately.) Today, for Ricardians, the message must be that Richard is free from the crimes of which he is accused – the murder of his nephews, particularly. But well beyond that, if you look at the media coverage, it seems everyone is trying to draw a lesson from this story.

Is it about resurrection, is it about justice? Or just about celebrity? Is it about the historical inaccuracy of Shakespeare’s portrayal – or about his right to portray the most lurid figure of his fantasy? Is it even about links between cultures? – so yesterday’s reporters seemed to be trying to suggest in Leicester; that most multi-racial of cities. But I’d say that from yesterday’s pageantry, there is just one lesson that doesn’t go away.

Silly? Yes, in one sense the flowers and fuss were silly. Richard III has been dead 530 years, so there were no close relatives on hand to be comforted this way. But the newspapers certainly got swept along – ‘Richard III comes home at last’, proclaimed the Guardian (who should know better) the next day.

In what sense Leicester could be considered Richard’s home, of course, is hard to see. Middleham, Fotheringhay, York, maybe. (Home into the bosom of the church, perhaps – for he was a devout man; albeit that this church is not the church of his own day.) But if you ignore the question of the venue – and Leicester, having dug him up, were never going to let Richard go – then it was oddly touching to see the huge efforts made to give these dry bones what their owner might have wanted. The fifteenth century Vulgate on the coffin and the rosary within it; the Catholic archbishop to give the sermon at the ceremony.

Months back when the scientific work was concluded – when we heard details of the blows that killed Richard, of the ‘insult injuries’ inflicted on his body – the effect was to show this most controversial of monarchs as a bleeding, vulnerable man again. ‘Our brother Richard’, as the priests said yesterday. For me, that ceremony drove home the message – not of Richard’s guilt or innocence in the crimes of which he is accused; but simply of his humanity.